After training on about a hundred epochs, the pixelCNN/autoencoder managed to achieve pretty good results: 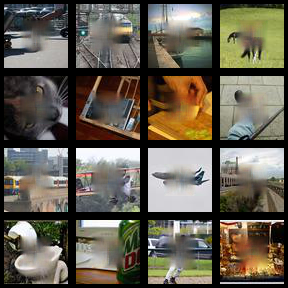 Unfortunately, it suffers from the same problems as the autoencoder models, i.e. the generations stay blurry.

I added a residual block to the network, since I calculated that with my current architecture, at least 14 residual blocks were needed for the 2×2 middle part to condition on the initial contour. I plan to try to add a few more to see if it helps with the lack of sharpness in the images.

I also tried to add caption information to the input by embedding the text using a char-CNN-GRU as suggested by Reed et al. 2017 when doing their experiments on the Caltech-USCD Birds dataset. As a mean to keep it simple, I embedded the text in a 64×64 2D space by first embedding it on a vector of length 64 and taking the outer product of it. Then, I simply added the generated output as a channel to the image. This way I can train the whole network rather than taking a different score for the text embedding and the image generation. Unfortunately the results are not (yet) very good:

Here are the architecture details:

The reason why all of the generations are the same color remains a mystery for the moment. It seems that the text embedding architecture limits the capacity of the model somehow. I plan to experiment with different feature sizes, maybe replace the 2-strided convolutions by 1d max-pooling or generate the 2D embedding space differently (rather than by taking the outer product).

Training the network altogether might also be too hard a task. I will try to think of some way to train the text parameters separately from the image parameters.